The video was shared on Facebook by SA Long Distance Truckers and shows the cameraman approaching the two officers seated inside a van.

The man asks the officials their names and other details to which they simply look at each other and don’t respond. 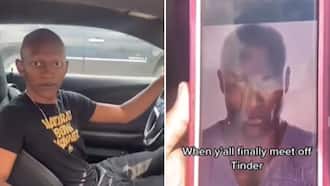 The man also alleged that the driving officer caused an accident and shows the police van as well as the rest of the scene, which he said the officers wanted to flee from.

In another clip, one of the officers is seen standing on the side of the road, to which the man asks him to go back into his vehicle and makes him aware that he’s recording a video.

“I don’t mind… They can do whatever they want to do.”

The Facebook footage left many Saffas appalled by the behaviour of the intoxicated men in blue.

“They are not taking their job seriously while most of the youth struggle to get a job.”

“This is the calibre of law enforcement we have in SA. And you wonder why crime is flourishing. There are criminal elements within the national police force, and then of course is the blatant don’t care attitude of some officers.” 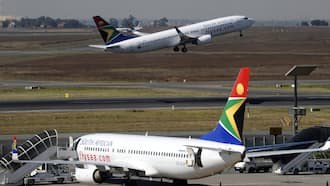 SAA has honest man begging for two months for them to take R5k that he owed them, Mzansi dished jokes

“Must fire them both and make them pay for damages.”

“Those who are supporting these law officers you actually don’t have the feeling of losing your relatives or your loved ones because of such reckless behaviour , imagine you left supper for them, and instead of welcoming them back from work you’re to receive a call saying they’re in the hospital or worst …”

“That guy looks like they exhumed him from his retirement grave.”

In another story, Briefly News reported on a video of an intoxicated, armed cop spotted in public as a group of schoolgirls try to help him up is doing the rounds on social media and sparked public outrage among Mzansi peeps.

The clip was shared on Facebook by SA Long-distance Truckers recently and sees the law enforcement officer trying to balance against a pole before he eventually falls to the ground. A teen approaches the cop and tries to help him up. The footage, presumably taken by another schoolgirl, also reveals that the man had his firearm on him at the time.

“And that, ladies and gentlemen, is supposed to be the man keeping us safe… He is so drunk he can’t stand,” the post was captioned.