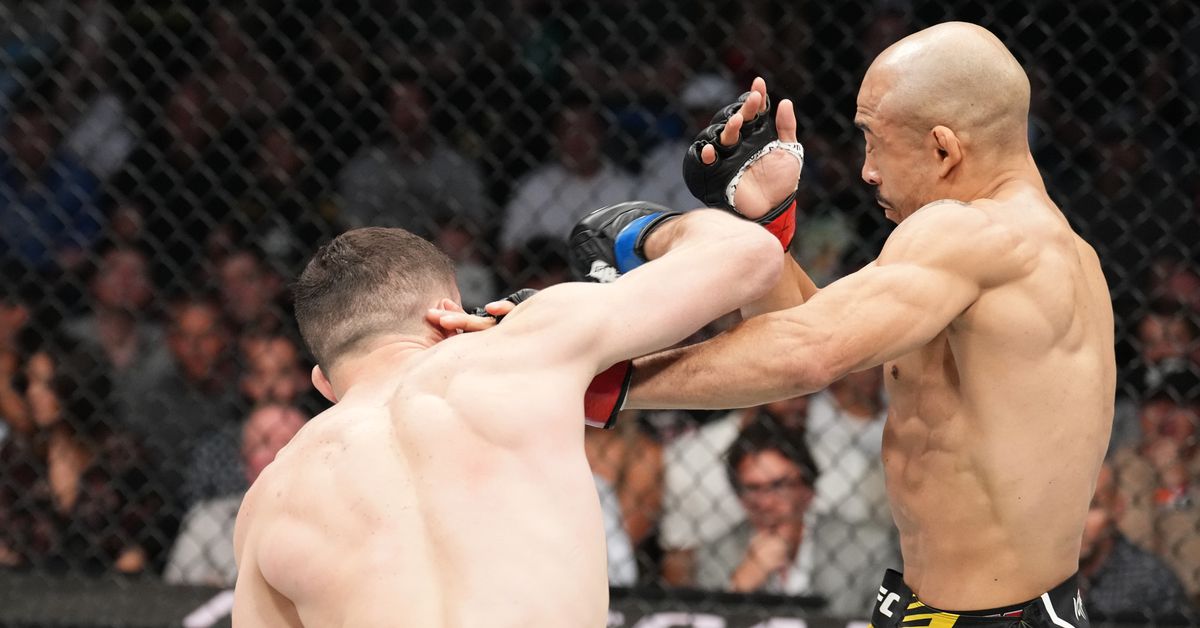 In a fight with huge title implications in the crowded and remarkably deep men’s bantamweight division, Merab Dvalishvili notched the biggest victory of his career in front of a pro-Jose Aldo crowd at UFC 278 in Salt Lake City, Utah. Dvalishvili did not register a single takedown in 15 attempts, but he was the busier fighter over 15 minutes and took a decision over the former UFC featherweight champion and MMA icon. It’s Dvalishvili’s eight consecutive victory, and while a title shot is close for him, that he’s training partners with reigning champ Aljamain Sterling complicates matters. He said he’s not fighting him at all so consider that a no-go. As for Aldo, it’s the end of his three-fight winning streak and likely the end of his final push to become a UFC champion again.

Aldo remained patient in the early stages of the contest, perhaps anticipating a takedown from Dvalishvili. After a couple of minutes, Merab inevitably shot in and Aldo was able to stuff him not once but twice. Aldo threw his vaunted leg kick that spun Dvalishvili around, but otherwise wasn’t throwing much. Dvalishvili again changed levels but could not get the Brazilian down. He did connect on a left hook on the exit so it wasn’t a totally empty trip. Aldo made a late surge in the closing seconds that included a wicked body shot that drew a smile from Dvalishvili.

Dvalishvili had a terrific entry on Aldo as he committed to a punch, but again Aldo was up to the challenge of stifling the wrestling of the Georgian. Dvalishvili kept busy with knees to the thigh. Aldo played to the crowd be feigning boredom against the fence, but the onus was on him to wriggle free, which he did. A heavy body shot landed for Aldo but the follow-up head kick was missed. Merab threw a couple of shoulder strikes, disengaged, and then shot again much to the protestation of the crowd. This was more or less wall-and-stall but it did prevent Aldo from getting into an offensive rhythm. Dvalishvili was relentless with his wrestling, throwing a spinning backfist into another shot but Aldo would not go down.

After another failed takedown, Dvalishvili at least got something going with a good right hand. Aldo connected on a knee to the body but Dvalishvili was pressuring and Aldo was being very economical with his strike selection. Dvalishvili was just plain busier and had more of a pace in the third round, so even without a takedown he was getting in some good offense with knees to the thigh. It was just too passive a showing from Aldo for all of his success stuffing the takedowns, and Dvalishvili won largely by just being more active.