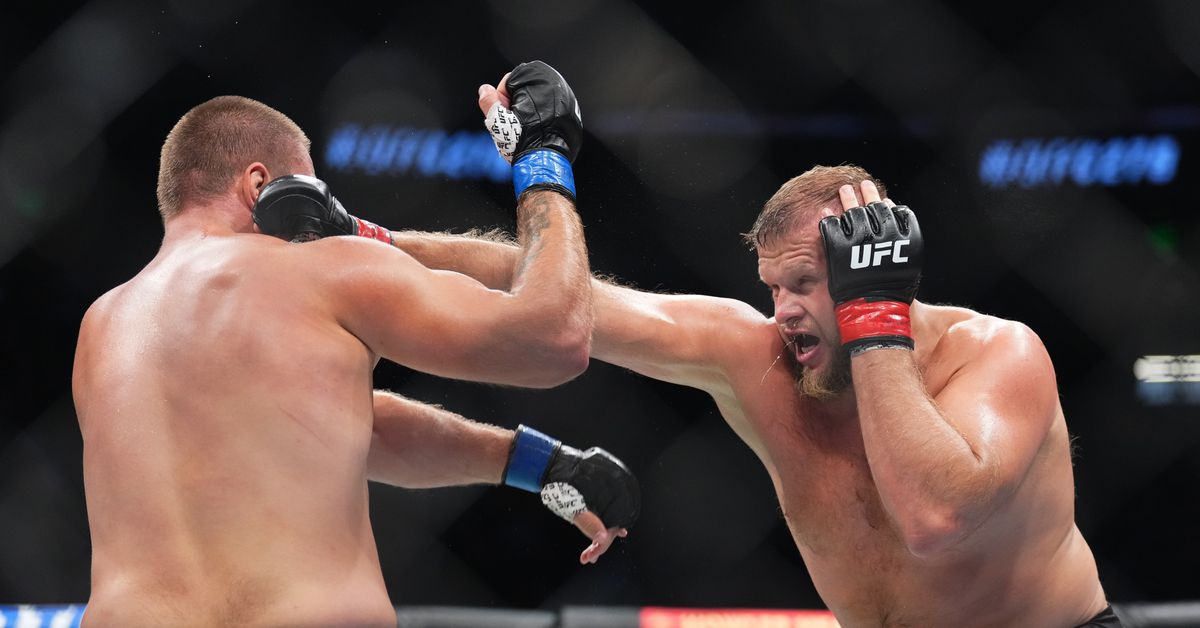 The UFC 278 prelims are in the books, and needless to say the fights were up and down in terms of entertainment and judging quality. Victor Altamirano got things started with a dramatic comeback TKO of Daniel da Silva, followed by Aoriqileng staving off a late rally from Jay Perrin to take a decision. Amir Albazi ended a long layoff by submitting Francisco Figueiredo, Ange Loosa won a grueling, crazy fight over A.J. Fletcher, Luis Saldana idiotically threw away a win vs. Sean Woodson, Jared Gordon took a decision over Leo Santos, and Marcin Tybura pulled off a surprise against the no longer undefeated Alexandr Romanov.

Here’s how the fights played out in Salt Lake City:

It looked like it would be a long night for Tybura after he was slammed twice by Romanov and generally just beaten up. The official strike totals had Tybura landing zero strikes in Round 1, and yet Romanov faded after that. Tybura had the better of the striking for the rest of the fight and even had side control and back mount on Romanov in the latter stages of the second. He almost made a costly mistake when he slipped out the back and took some big shots from Romanov, but time had run out. Romanov did an Ali shuffle in Round 3 but that’s as close as he’ll ever get to imitating the boxing legend.

Curiously, only one judge gave Romanov a 10-8 so instead of a draw, it’s the first loss of Romanov’s career. Tybura once again is able to overcome a slow start to win.

Three rounds of Gordon throwing body punches, particularly in the clinch, and Santos pretty much just accepting it. The one bit of controversy was when Gordon stopped a takedown with a clear fence grab, but Herb Dean didn’t punish him and no point was taken. That could’ve provided the 42-year-old a chance back into the fight in round two, but that opportunity went and Gordon controlled the rest of the fight with ease.

This fight made no sense and was bizarre and bad all at once. Saldana dropped Woodson with a check hook and then celebrated too early and real stupidly. He thought he was Mark Hunt but he didn’t. Then a jab dropped the lanky Woodson and after prematurely celebrating that, he careened into Woodson with an obvious illegal knee to the head. This resulted in Saldana losing a point, and he’s lucky it wasn’t the entire fight. Woodson was able to continue fighting and he ended up taking the second round with a prolonged buggy choke (!!) attempt. The third round was a disjointed mess not worth remembering, but in the end Saldana’s stupidity cost him a win.

The swings in momentum in this one were like a pendulum. Fletcher had a bright start to the opening round but Loosa was able to find his timing and he couldn’t miss with the right hand. His repeated success with the right stiffened and stunned Fletcher. Loosa continued to have the better of Fletcher on the feet in round two before Fletcher launched a stunning attack of punches that hard Loosa badly hurt and just about out on his feet. Curiously or perhaps due to sheer exhaustion, Fletcher shot for a takedown and basically gave Loosa the opportunity to recover from what must have been at least 15 unanswered head shots.

Fletcher spent his money looking for the finish in Round 2 and had nothing to offer in the final round. Luckily for him Loosa was also tired so other than a few elbows, Loosa couldn’t knock him out. It was just a round where Loosa hung around in half-guard and didn’t let Fletcher up. A crazy fight that ends in Loosa’s first UFC win.

This was not a particularly competitive fight. Albazi scored a takedown off a caught kick and got in some ground-and-pound that had Figueiredo hurriedly scrambling to get back to his feet. Unfortunately for him, the final time he was taken down prompted the end of the fight. A failed leglock by Figueiredo cost him his back, and Albazi had the hooks in and the rear-naked choke. We haven’t seen Albazi for a year-and-a-half but he looked damn good in his return.

Aoriquileng started strongly with a hard left hook that wobbled Jay Perrin in the opening round. ‘The ‘Mongolian Murderer’ also had Perrin in trouble with a flying knee. Perrin got his bearings again but even with the late takedown it was still an Aoriqileng round. That flying knee caught Perrin again early in round two but Perrin no-sold it. Off a caught kick, Perrin was able to get Aoriqileng down again. Not much happened with that takedown and Aoriqileng got back to his feet. Perrin suffered a flash knockdown when he ran right into a counter right by Aoriqileng, and wading forward he was caught clean with the same punch. After getting drilled in the lead leg with a kick, Perrin shot for a takedown but couldn’t get it. There was no doubt that Aoriqileng was the better, more effective striker. Perrin was tough and getting his own shots in but he was getting lit up too often.

A late comeback by Perrin fell just short but not without a hell of an effort. Perrin rocked Aoriqileng with several hooks and had him wobbled but couldn’t break him to get the KO that he evidently needed.

There was a whole lot of action packed into a few minutes. These two were looking to knock each other out in seconds. A right hand knockdown was scored by Daniel da Silva, a mere beat or two after he just missed on a head kick. A spinning backfist by da Silva had Altamirano stunned again. Da Silva was in control up until Altamirano floored him with a knee to the body. The Mexican rained down some serious elbows on the ground and had to fend off an armbar from the Brazilian at the same time. Those elbows cut da Silva open, and they were unrelenting. He was badly hurt and the unanswered strikes resulted in a TKO.