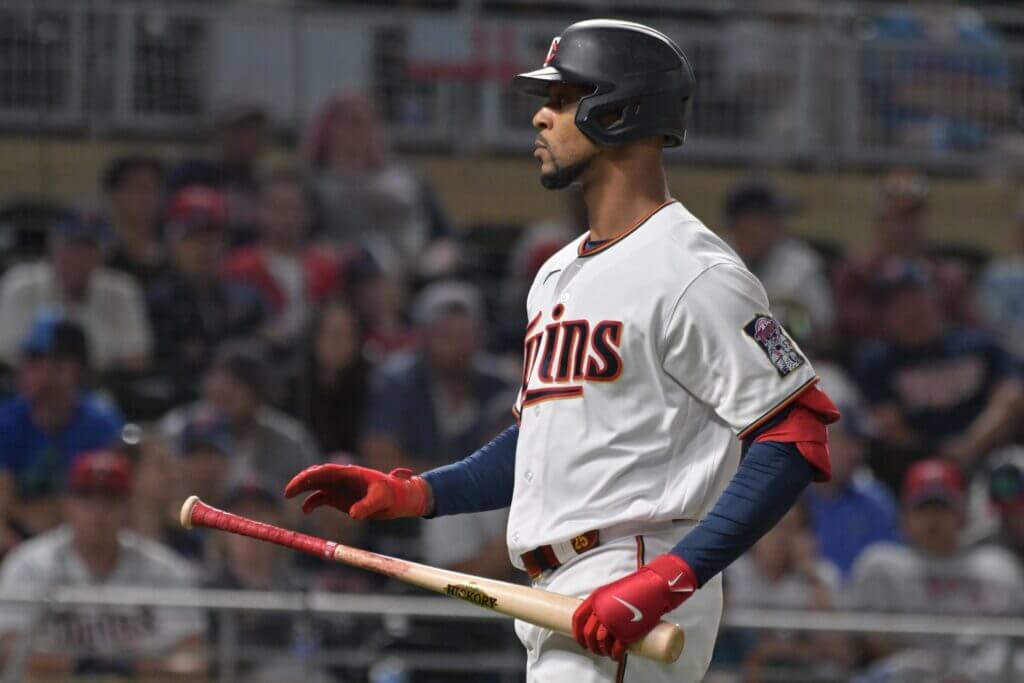 MINNEAPOLIS — The Twins offense left its pitchers on the hook for another difficult loss Saturday night.

Last weekend, the Twins won the series opener but then lost a pair of winnable games against the Los Angeles Angels by going 0-for-18 with runners in scoring position. Saturday’s loss snapped the team’s four-game winning streak, though the Twins didn’t lose any ground in the American League Central as division-leading Cleveland lost to Chicago.

Carlos Correa and Byron Buxton continued their season-long struggles with runners in scoring position as each went 0-for-2, with Correa also drawing a walk.

“Those guys do so much for us and they help us win so many of the games that we do win,” manager Rocco Baldelli said. “I don’t focus too, too much attention on that because I do believe that those guys are going to come through a ton and if they haven’t, they will, and that’s firmly the way that I think about it. Could anyone put pressure on themselves to carry the load all the time? I mean that’s a normal thing for, I think, anyone to think about or feel at some point. I wouldn’t be surprised if at some point those guys do feel like that, but I just think those guys are going to be the ones that carry us to where we’re going to go this year.”

The Twins offense didn’t break through against Rangers starter Glenn Otto until the fifth inning. Down 1-0, Luis Arraez tied the score with a one-out RBI single in the team’s first plate appearance of the night with RISP. But with two on, Otto retired Correa on a comebacker before Buxton smacked a hellacious, sinking liner toward left field that found the glove of Rangers outfielder Bubba Thompson to end the threat.

Buxton’s liner exited the bat at 109.6 mph and had an expected average of .710. But it’s just the way things have gone this season for Buxton, who has an .838 OPS overall but entered Saturday with a .645 OPS with runners in scoring position.

Baldelli expects his hitters will eventually rebound to their career norms. While Buxton is just a .700 OPS overall for his career, two of his best seasons with runners in scoring position occurred in 2019 (.950) and 2021 (.800).

“Every hitter in Major League Baseball goes through periods where they’re really great at that and other times when you have a handful of at-bats that you don’t produce in quite the same manner,” Baldelli said. “But when you’re a really good hitter, you’re a really good hitter with runners in scoring position. Is it like that over the course of a month or two or three sometimes? Not always. But I’m always going to bank on the good hitters being the ones to produce when there are people on base.”

The Twins wasted a leadoff double in the seventh inning down a run but were temporarily rescued when rookie José Miranda hit an RBI single to right-center that scored Max Kepler all the way from first. Down two runs in the 10th, Buxton struck out with two aboard before Jorge Polanco grounded out. After Kepler reached on a run-scoring error, Miranda flew out to left field.

“We had a tough time stringing together the types of at-bats that we needed,” Baldelli said. “We can’t rely on just one swing to get the job done.”

A day after they were hopeful he’d avoid it, the Twins placed Tyler Mahle on the 15-day injured list retroactive to Thursday with right shoulder inflammation.

Mahle indicated after batting practice Friday he felt “really good” and was generally optimistic about his situation. The Twins said none of that changed, but instead they wanted to be cautious with the right-hander and use his roster spot.

The Twins called up Devin Smeltzer to give them a second left-handed pitcher to face a Rangers lineup loaded with left-handers and switch hitters. Smeltzer pitched three innings Saturday, allowing a run.

“This is just a wise and forward-looking move,” Baldelli said. “He had the thought that he may be able to start, and miss one outing, and not have to go on the IL, but for an assortment of reasons and also looking at the next six weeks of the season, I think what’s going to set us up for success and set him up to lead us on the mound in a lot of ways, is to get back closer to full strength. Just because he’s able to pitch doesn’t mean it’s the version of Tyler we all want to see.”

The path forward boils down to an X-ray to be taken Monday. If Ryan Jeffers’ thumb looks as good to his surgeon as he says it feels, the Twins catcher plans to significantly increase his rehab activity as soon as the middle of the week.

Jeffers had surgery to repair his fractured thumb July 20. Four and a half weeks later, Jeffers thinks he’s made very good progress.

If all goes well, Jeffers believes he could rejoin his team sometime during its final homestand that begins Sept. 23. Either way, Jeffers thinks he should be able to return before the regular season ends.

“If everything is great, then I’m getting a good solid 10ish games of regular season before the playoffs, which could be some games that are immensely important,” Jeffers said. “I want to be back and doing what I can and be ready to go for those games. If it turns out that I’m not ready and I’m not going to be able to come up here and be full strength to help the team, then we’ll make the decision. Maybe it’ll be the last series of the year, get you a couple more rehab games.”

Jeffers hasn’t played since July 14. While he’s hitting just .214/.291/.375 with seven homers, Jeffers is encouraged by the adjustments he made starting in June. Over his last 21 games, Jeffers had a .871 OPS with four homers in 76 plate appearances.

“If I start swinging and it feels great, then maybe we can move a little quicker, and if it doesn’t then I’ll still stay on track for that 10-week mark,” Jeffers said.

Doesn’t matter that he’s out for the season, Mitch Garver was making this trip. The former Twins catcher is back at Target Field this weekend for the first time since he was traded to the Rangers in March.

Garver had season-ending surgery in July to repair an injured flexor tendon in his right forearm. His right arm will remain in a brace for another few weeks, but Garver expects to be ready for spring training in 2023.

Garver spent time with Twins clubhouse manager Rod McCormick on Friday and then sat on the rail of the Rangers dugout and chatted with Baldelli on Saturday.

“I was happy here,” Garver said. “A lot of stuff happened here. Great seasons, baseball-wise, and a lot of great things that happened. Debuted here, won an award here, won divisions here. A lot of my life is associated with this place. My son was born here, my family kind of started here, we put our dog down at that house over there. A lot of things happened here. There’s a lot of stuff you have to consider.”

As the end of the lockout neared, Garver joked he would be traded. He knew the Twins also had Jeffers, who was younger, less expensive and had more years of team control. Garver also looked at the roster and suspected the Twins could fill one of their many holes by trading him.

Still, it came as a surprise when Thad Levine called on March 12 to inform Garver he’d been swapped for Isiah Kiner-Falefa. Garver had an .835 OPS over parts of five seasons with the Twins.

“Expect would be the wrong word,” Garver said. “I was anticipating it. They’ve got a really good young catcher in there. I don’t know, for some reason it was in my head — I might be able to bring back some pitching or somebody that the Twins need. They got Carlos Correa out of it. Funny how it all worked out.”

(Photo of Byron Buxton after his strikeout in the 10th inning Saturday: Jeffrey Becker / USA Today)