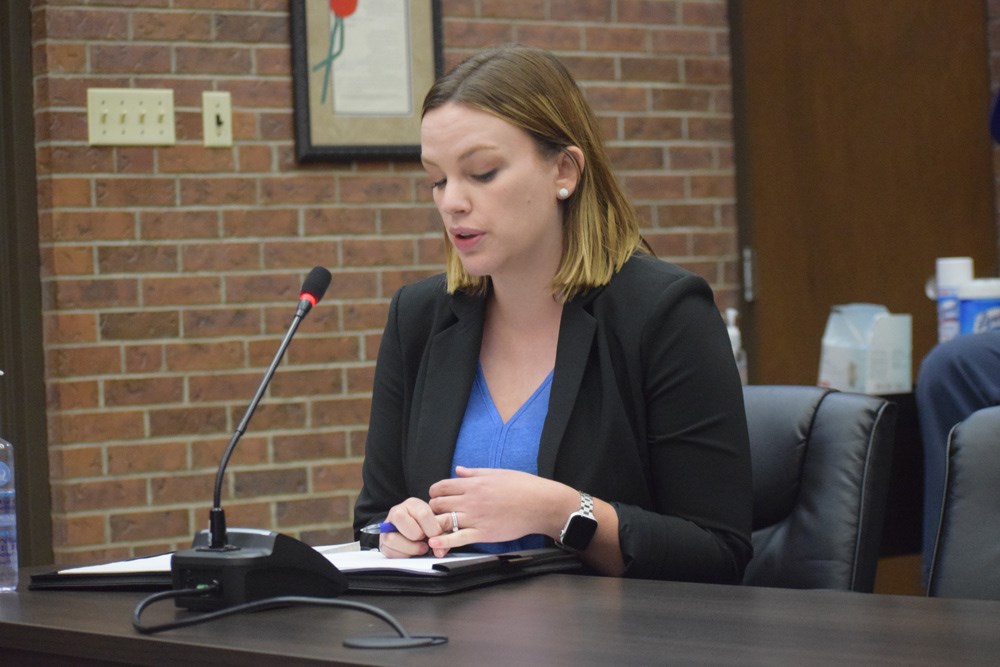 Estevan city council members had a number of questions about the proposed 100-megawatt project.

ESTEVAN – Estevan city council learned more about SaskPower’s plan for a solar power facility in the area during council’s meeting on Sept. 12.

Christine Enmark with SaskPower’s stakeholder consultation and public engagement team spoke to council and answered questions. She noted that SaskPower is in the process of finding an independent power producer (IPP) for a 100-megawatt solar facility in the Estevan area.

The Crown corporation announced its intention to proceed with the facility in the spring. Interested IPPs have participated in a request for supplier qualifications.

“That stage of the project just finished, and we have enough IPPs to qualify to move into the next stage, which will be the request for proposals,” said Enmark.

Criteria for the IPPs include experience, financial capability, Indigenous ownership, environmental impact, price and stakeholder engagement; the latter has been her focus.

SaskPower will be conducting all of the initial engagement work on behalf of the IPPs for the project, so she said the corporation has asked the IPP filers not to contact other stakeholders in the community. Everything should be coming through SaskPower, and then she said it will be provided to the IPPs as part of request for proposals.

Enmark is looking for answers to questions on what council wants IPPs to know about the project in general, the potential facility area, the impacts to the community, when they think they should hold a meeting, where the session should take place, whether it should be virtual or in person and who to talk to.

Responses from council will be forwarded to her.

When asked by Coun. Lindsay Clark about who would own the facility and the property, Enmark said the IPP would build and operate it through the full life span, and be fully responsible for eventual decommissioning. SaskPower would own the land and purchase the power through an agreement.

SaskPower currently purchases power from a couple other smaller-scale solar facilities and some wind-power sites.

Mayor Roy Ludwig noted that open house sessions are typically held at the Estevan Leisure Centre’s multi-purpose room, as it has plenty of space. When the open house does occur, people from both the RM of Estevan and the City of Estevan would need to be invited.

“First of all, we appreciate this project,” said Ludwig. “This will bring jobs to our community, and we’d like to thank you and SPC [SaskPower Corporation] for bringing this forward.”

But Ludwig asked whether it would be possible to have this on land that SPC presently owns instead of farm land. The mayor admitted he thought the SaskPower land might be too unstable after it has been dug out by the draglines for coal mining.

“I think the project team is looking at investigating and seeing what they could do in the future with that land, but just for this project, there is too much uncertainty,” said Enmark.

Coun. Rebecca Foord asked that the open house wait until after harvest is complete, since she believes there would be a lot of feedback from rural land owners.

Coun. Travis Frank noted that since Estevan is looking at the future of coal-fired power generation, the successful IPP should be aware of that sensitivity.

“Obviously one has nothing to do with the other, that’s something that we’ve tried to make sure is conveyed with this project is this is not taking away from coal or our power plant or anything, This is on top of it,” said Frank. “There’s going to be a need for electricity in our province. So this is an add-on, which is great for our community.”

“We probably don’t have enough baseload power at that time, in my opinion. I think we’ll have to keep running [coal-fired power]. For how long, we don’t know.

“But it’s that sense of uncertainty that is bothering our people out at the mines, out at SPC, the fact that there doesn’t seem to be any certainty at all, other than come 2030, no one seems to know what is going to happen.”

Job losses associated with the end of coal-fired power will be huge for the community, Ludwig said.