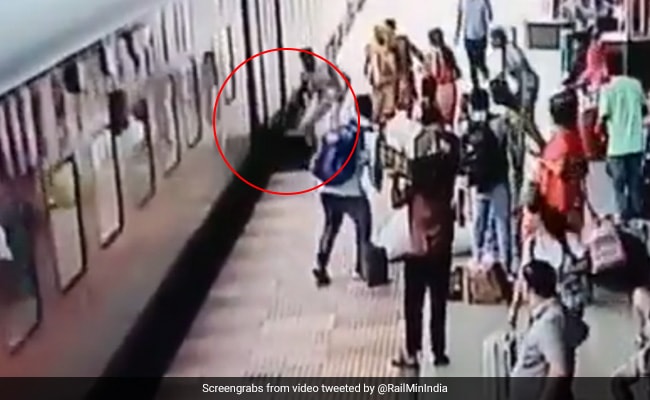 A woman falls on the platform while boarding a moving train on Raipur railway station.

Indian Railways always advises against boarding or deboarding from a moving train, but some people do not pay heed and as a result, suffer the consequences.

A video is going viral on social media which shows a woman falling on the platform while trying to board a moving train. A Railway Protection Force (RPF) personnel became her saviour, preventing the woman from falling into the gap between the platform and the train. Fortunately, he was walking on the platform when the incident took place and saved her life.

The railways hailed the quick-thinking of the railway cop. “The promptness of the railway employee saved the life of a passenger! A woman suddenly fell down while boarding a moving train at Raipur station in Chhattisgarh. The RPF personnel on duty quickly saved his life. Do not get on/off a moving train, it can be fatal,” it said in a tweet.

Also Read | Viral Video: Man Takes Nap With 2 Pythons Crawling Over Him, Internet Asks “How Can You Chill?”

The railways tweet also carries a video of the incident, recorded by the CCTV installed at the platform. It has been watched over 18,000 times. More than 300 people have liked the post and 103 people retweeted it.

Users too have praised the RPF cop. “Congratulations to the RPF teams. To avoid such incidents, the platforms levels may be raised to match the entry way of coaches,” a user tweeted.

This is not the first time that an alert railway cop saved the life of a passenger. Just days ago, a major mishap was averted at the Prayagraj station when a man’s life was saved by an alert Government Railway Police (GRP) constable. The man fell from a moving train while sitting on the gate of a coach.

Similarly, a head constable from the RPF recently saved a woman in Odisha from falling between a moving train and the platform at Bhubaneswar railway station. A CCTV camera captured the incident.