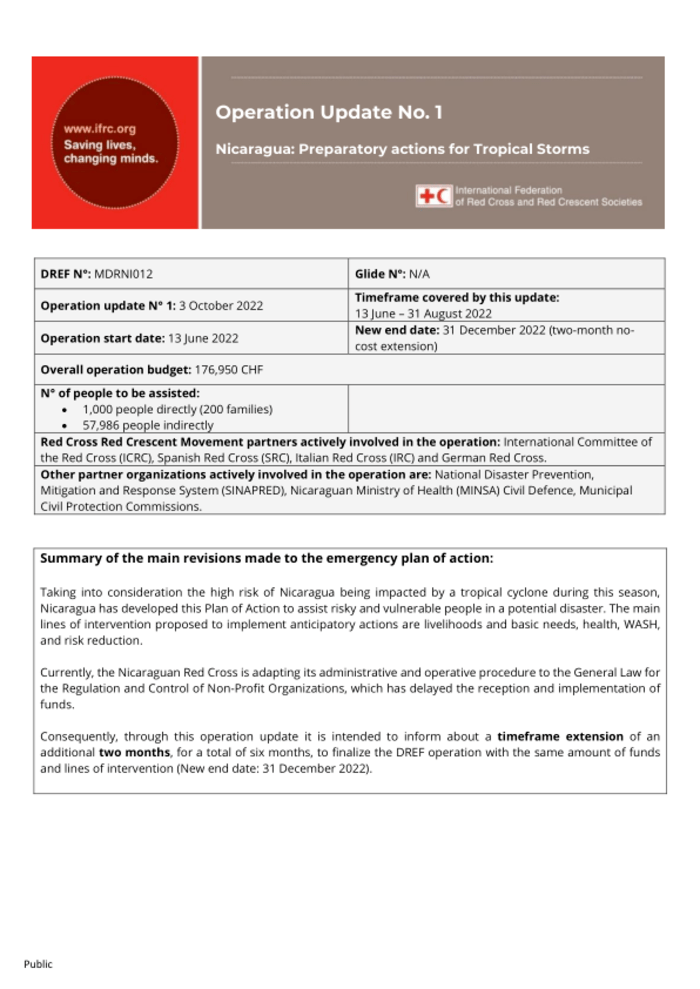 Summary of the main revisions made to the emergency plan of action:

Taking into consideration the high risk of Nicaragua being impacted by a tropical cyclone during this season,
Nicaragua has developed this Plan of Action to assist risky and vulnerable people in a potential disaster. The main lines of intervention proposed to implement anticipatory actions are livelihoods and basic needs, health, WASH, and risk reduction.

Currently, the Nicaraguan Red Cross is adapting its administrative and operative procedure to the General Law for the Regulation and Control of Non-Profit Organizations, which has delayed the reception and implementation of funds.

Consequently, through this operation update it is intended to inform about a timeframe extension of an additional two months, for a total of six months, to finalize the DREF operation with the same amount of funds and lines of intervention (New end date: 31 December 2022).

The Colorado State University forecasted that 2022 would be an above-average hurricane season, with at least 19 named storms and nine hurricanes — four of which will be Category 3 or higher. An average season typically has 14 named storms, around seven hurricanes, and three major hurricanes.

According to the Global Climate Risk Index, from 1998 to 2017, Nicaragua was ranked sixth among the top ten countries most exposed and vulnerable to extreme weather events. Due to its geographical position, Nicaragua is exposed to the recurrent impact of multiple natural phenomena such as earthquakes, volcanic eruptions, tsunamis, floods, landslides, droughts, and tropical cyclones.

In the last 20 years, Nicaragua has been hit by major extreme weather events such as Hurricanes Mitch in 1998, Beta in 2005, Felix in 2007, and most recently by hurricanes Eta and Iota in November 2020, which hit the North Atlantic Autonomous Region (RAAN) 15 days apart with maximum intensity. The economic, social, housing, and infrastructure losses caused by these two last hurricanes have devastated the region. According to the National System for Disaster Prevention, Mitigation and Response (SINAPRED by its Spanish acronym), these hurricanes combined affected 56 municipalities nationwide and put three million people at risk.

The disasters caused by Eta and Iota hurricanes in 2020 revealed the need to constantly monitor potential climatological events that could impact Nicaragua’s territory and plan efficient mechanisms to address various threat scenarios in the country. In the last months, heavy rains have fallen across most of the country, which, together with the soil’s permeabilization, have led to collateral effects such as the early saturation of the soil. In April 2022, these rains caused structural damage, such as the Miraflores bridge that connects Los Brasiles and Ciudad Sandino in Managua department collapsed. Other damages from Tropical Cyclone Bonnie includes flooding and partial damage to homes, mostly exposed roofs, and over 400 fallen trees, mainly in Rivas. Some latrines were also damaged by strong winds.

The risk of major extreme weather events impacting the national territory is considerable at this moment. The population with the highest level of risk and vulnerability is in the North Atlantic Autonomous Region (RAAN by its Spanish acronym). The population of this region has historically lived overcrowded and with homes built from insecure materials. In addition, the homes suffer essential barriers to access safe water due to the absence of water services and the exposure of the principal sources of water (water wells and rivers) to contaminants by floods. Access to health services is limited too due to the long distances between communities and the insufficient resources of the public health institutions to assist the number of cases. Also, the population historically presented high rates of general and extreme poverty, combined with unavailability of access to other basic human needs.

The potential risk of Nicaragua being impacted by tropical cyclones during this season requires the execution of anticipatory actions to respond in a timely effective and efficient way to any disaster that could aggravate the vulnerability situation of the population. Therefore, response units of the Nicaraguan Red Cross (NRC) will remain alert through a system that monitors the situation and strengthen, preparedness, and equip local branches at the national level to respond to any possible disaster.