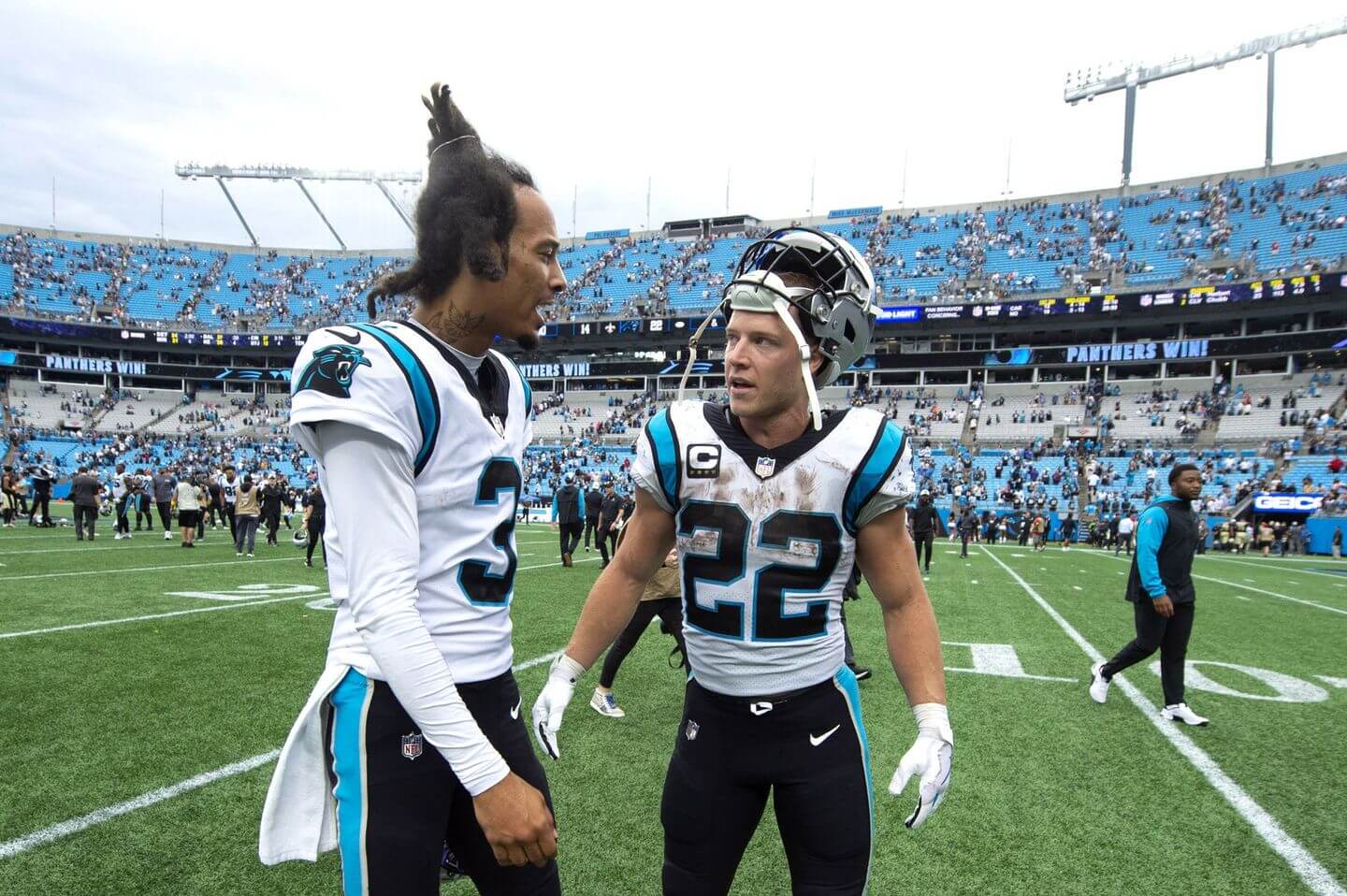 Are you a gambler? I think Hunt has a big game today, but even if you aren’t buying my feeling, Hunt is quietly averaging almost 14 PPR fantasy points per game. He’s overshadowed by Nick Chubb, but this should be a game where both can crush. I avoid Tampa Bay’s run defense whenever possible, and am benching CEH this week in my dynasty league.

Q: Do I go with Russell Wilson or Aaron Rodgers? John S.

Rodgers is definitely safer, but as noted below, I do like Wilson to have his best game of the young season today.

The latest on Christian McCaffrey’s status

While Christian McCaffrey plans to test his quad in early warmups, the Panthers remain optimistic McCaffrey will play today against the Cardinals, per sources.

What to do with Rashaad Penny and the Seattle backfield?

Q: What to do with Rashaad Penny and the Seattle backfield? Is this salvageable or just cut bait?-Christopher J

I’m still trusting Penny in one league where I have him. If he doesn’t do it today, in the second-best RB matchup (a trend that goes back a few years), then ask us again next week.

Who has the least value rest of season?

Q: Deep 14-team league, need to make room for a dropped Dak Prescott. Who has the least value rest of season: Josh Palmer, Rondale Moore or Isaiah McKenzie? -Christopher B.

I don’t like to do ROS questions here, but this seems urgent. So much depends upon injuries, but I’d never start Palmer if Keenan Allen was healthy. I don’t love or trust Moore as much as some people, but I at least want to see him play before I drop him. I see McKenzie as a viable desperation play any given week given his speed and sporadic usage, a nice guy to have on the bench. So drop Palmer.

So pick two? You’ve got them in the order I’d use them in. You can run on the Eagles, and London is ready to smash. It’s a good spot for Matt Ryan, but I think he’s potentially a better real-life than fantasy QB today.

Which QB should I start?

Ugh. I’ll take a flier on Wilson this week. It’s his best matchup to date, should be competitive and high scoring.

There’s always a question of whether the WR makes the QB great or vice versa, and I’m tilting toward Amon-Ra St. Brown being the “it” factor in the Lions’ case.

I’ll take Davis and Williams. I love Christian Kirk, but I think Darius Slay is one of a few cornerbacks to avoid when you have the luxury.

Q: Rashod Bateman in a hurricane vs. the Bills or JuJu Smith-Schuster vs. the Bucs? Half PPR. -Anonymous

It’s not a hurricane, see below. I’d go with Bateman, but it’s very close. I hope both are really good today for selfish reasons!

Who’s my best bet at RB this week?

Dillon has two games under eight half-PPR fantasy points, which isn’t a super floor. New England has been the fifth-worst RB matchup so far this season and they are going to NEED that defense. Smith-Schuster will continue to be up and down, so I think Jones might be your best bet this week. An average of nine targets per game and an 80 percent catch rate is a pretty nice outlook for what should be a competitive game (with Darius Slay on Kirk?).

Why I believe in Gabe Davis this week

There are a lot of Gabe Davis doubters; I’m not one of them. He saw six targets and dropped a touchdown last week. The heat was crippling. He’s a week MORE removed from the ankle injury. I wouldn’t have called him a decoy last week and I think he’s going to be fine today.

The No. 2 for the Bills is a great role, better than a lot of teams’ No. 1. The weather isn’t a hurricane in Baltimore, it’s rainy with moderate wind, nothing approaching that 40 mph cutoff that makes us worry about passing accuracy. I’m trusting him in two leagues this week.

Choosing between these 3 WRs

Q: I have to start one! Mike Williams, Gabe Davis or Chris Godwin. Half PPR. -Chad D.

For me, this comes down to Williams or Davis and you probably can’t go wrong. I’d start Williams as the de facto WR1 for L.A. (although as noted below, Josh Palmer has more targets and receptions). Williams is definitely healthy, Herbert sounds like he’s fine, and Houston has been keeping games close, which should mean plenty of opportunities. Davis should absolutely bounce back here, and I love the Bills game in general for fantasy this weekend, but slight edge to Williams as the No. 1 for his team, while Davis will probably be in Stefon Diggs’ shadow as the No. 2.

Robinson for the higher floor, but Patterson for the upside. If you need a home run play to beat the league juggernaut, Patterson. But if you’re winning or projected to win easily, go with Robinson. I’m confident in his usage, even as Etienne gets work in the passing game.

Q: Thanks for the advice as always. Should I start Josh Palmer over Allen Lazard with Keenan Allen out? Also thinking about Isaiah McKenzie but feel like the better play is one of the above. -Christopher B.

I’m not as down on Lazard as a lot of you guys are, but here I’d go with Palmer. He actually leads the Chargers WRs in targets (21) and receptions (13), and this is a great bounce-back spot for Justin Herbert and the Chargers, who are five-point road favorites over Houston. I think we’ll see McKenzie slide into the background with Gabe Davis, and of course, Stefon Diggs, playing the prominent roles for Buffalo in Maryland.

I like the symmetry of this question with the one below. Before I reluctantly answer, I have to say: Unless you’re in a 30-team league, there should be better options. Carolina? New England? Las Vegas? I mean, I can’t start a defense against Patrick Mahomes, and I just wrote that I like Derek Carr a lot, so I’d be heading to the wire. If you must, Broncos.

Q: Tom Brady or Derek Carr? I feel whoever I pick is the wrong answer. I think Brady has some good upside after getting some WRs back and not playing as difficult a secondary. However I feel Carr just has good fantasy games, not necessarily good games though. -Matthew H.

Ah, the age old question of whether “good QB” means the same thing for fantasy as it does for reality. It’s great when it does: Josh Allen, Patrick Mahomes, Lamar Jackson and Jalen Hurts make for no-brainer plays. But what about those real-life terrible QBs (sorry, Jameis Winston) who are good or even sometimes great for fantasy? Or real-life great QBs that aren’t always up to snuff for fantasy? This is kind of where I see Brady at the end of his career.

One thing I sometimes use as a differentiator is implied team total, since this has a strong correlation with QB fantasy points, but it won’t help you decide between these two this week. I doubt the massive fantasy games are going to be frequent for Brady this season, but I do agree there are reasons why you’re tempted this week (Chiefs, hurricane narrative, Mike Evans and possibly Chris Godwin and Julio Jones back). I’m still going with Carr, who has been nearly twice as good as Brady. Though some might point to the Denver defense looking better this season, I say look who they’ve played. Good luck!

Q: Half PPR, just need to pick two: Cordarrelle Patterson, AJ Dillon or Chris Olave. Thanks for all your help this season — your advice has been money! -Stuart J.

Thank you! That’s great to hear. Let’s get this in before the early start! I’m all in on Olave going forward, and for today, I trust Patterson over Dillon. The usage has been better, less competition, and the Packers still clearly trust Aaron Jones (with good reason, 6.8 yards per carry).

As a neuroscientist, it feels wrong to write any sports-related piece without acknowledging Dolphins QB Tua Tagovailoa’s recent injuries. First and foremost, I am an educator, so here are a few facts to consider on the topic:

Alvin Kamara out for Saints

New Orleans will be without quarterback Jameis Winston, running back Alvin Kamara and wide receiver Michael Thomas on Sunday in London.

Jameis Winston and Michael Thomas are out. Alvin Kamara’s out. This could be an old school Andy Dalton-Mark Ingram/Latavius Murray-Jarvis Landry game. London fans are going to get a weird New Orleans team to watch this morning!

If what we see before the game every week holds true, it looks like Alvin Kamara is going to be inactive. We’ll see, though