If ever there was a month when U.S. shippers appreciated the volume of freight moving north-south across the Mexico and Canada borders, January of 2022 was it.

A rogue trucker protest had taken over Ottawa, the Canadian capital. As a spillover, a few Canadian truckers opposed to COVID-19 vaccination mandates blocked the Ambassador Bridge between Windsor, Ontario and Detroit. It’s the busiest international land crossing in North America.

The Ambassador Bridge handles an estimated $323 million in cross-border freight every day—that amounted to $131 billion last year. That’s one bridge across two friendly countries. Yet, a small blockade halted freight moves, threatening auto plants on both sides of the border from receiving just-in-time freight moves and other critical freight.

The closing of the Ambassador Bridge, albeit temporarily, was cited by trucking analysts as one factor leading to a slowing U.S. economy. The U.S. Bank National Shipments index dipped 2.2% in the first quarter of this year versus the final quarter of 2021. Keep in mind, the national economy, and the freight economy, were also affected by global issues including COVID-19 variant cases and spiking energy prices.

The United States and Canada share the longest international border—5,525 miles—and the most prolific bilateral trade relationship—nearly $2 billion exchanged every day. The United States far outpaces China as the dominant point of origin for goods imported into Canada. A key reason for that is the ease with which goods are transported in and out of Canada via truck, aided by more than 120 land ports-of-entry lining the border.

Overall freight traveling between Canada and the United States using any transportation mode was valued at $664.2 billion during 2021. That’s roughly the same as the $661.2 billion that crossed between the United States and Mexico, according to the BTS (all figures in U.S. dollars).

A few other facts: The busiest border crossing between Canada and the United States was at Windsor, Ontario, accounting for $131 billion in trade last year. Top U.S. imports included computer-related parts and machinery, at $44.2 billion. That’s followed by vehicles other than railway ($44.2 billion). Top Canadian exports included mineral fuels, oils and waxes valued at $103.2 billion.

USMCA proving to be a “win”

Governing all this freight is the U.S.-Mexico-Canada Agreement (USMCA), signed on Nov. 30, 2018, which became fully effective on July 1, 2020. Largely the same as the North American Free Trade Agreement (NAFTA) it replaced, the USMCA was designed to create more balanced, reciprocal trade while growing the North American economy.

While similar to NAFTA—hence the nickname “NAFTA 2.0”—there are some changes shippers must recognize to achieve seamless cross-border moves. Most notably the changes involve fine-print alterations of rules of origin (ROO) requirements, labor enforcement and revised levels of low-value thresholds.

At its core, the USMCA tries to build incentives to make production in North America more profitable and efficient. To that end, it provides a number of streamlining benefits over NAFTA—among them a single-window process, which allows the use of one data set to ship goods across borders of all three countries.

“When it comes to streamlining the cross-border process, shippers need to keep in mind the distance their freight will travel,” says Ed Habe, vice president of Mexico sales for Averitt Express. “To that point, freight needs to be routed through the most efficient crossing point along the border that will help reduce the overall transit of their shipment.”

At the same time, adds Habe, the closest crossing point may not actually be the most efficient. “Looks can be deceiving because you need to consider the destination on the other side of the border and what routes will work best to reach it.”

According to the Office of the U.S. Trade Representative, the USMCA is a “mutually beneficial win for North American workers, farmers, ranchers and businesses.”

That may be the official line but shipper representatives and transport executives say day-to-day execution may vary. They warn partnering with experienced brokers and Customs officials in all three North American countries is vital. Let’s examine the main challenges for truckers going north and south, address some common-sense solutions for shippers, and explore post-COVID outlook for cross-border trade.

In January 2021, $113.7 billion of trans-border freight was carried by all modes. That’s up 20.6% from the year before and 17.1% higher than the January 2020 level, according to the Bureau of Transportation Statistics.

But regulations banning unvaccinated truckers from crossing the United States-Mexico border tightened an already tight driver market. The United States imposed COVID-19 vaccine requirements on all non-U.S. citizens entering the country at land ports of entry—notably along the Canadian and Mexican borders.

This had the unintended effect of straining drayage capacity at the southern border. The United States allows Mexican drayage trucks to travel short distances northbound into the United States, usually within a 25-mile zone to drop off loads. But those loads were often delayed after the vaccine requirements went into effect.

From its long experience of working with valued and trusted Mexico-based partners, Greg Orr and CFI have developed a series of best practices for shippers in north-south moves. They are as follows.

“Communication, trailer balance and security are keys with our carrier partners,” Orr says. “We work collaboratively to ensure we understand the customer’s requirements.”

Greg Orr, executive vice president of U.S. truckload for Montreal-based TFI and president of CFI, says that his company’s long-lasting ties with approximately 85 core Mexico-based carriers makes the difference for CFI’s cross-border shippers. CFI gets about a third of its revenue from freight in and out of Mexico. “We work with them on a very regular business—and we have another 150 backup and secondary carriers.”

Veterans of U.S.-Mexico shipping say shippers need to look for carriers that have made a solid investment in their Mexico infrastructure. They need to ask how long have they been doing business in Mexico? How do they qualify their Mexican carrier partners? How do they manage their equipment in Mexico? What multi-services do they have to offer?

In and out of Canada

Shipping from the United States to Canada requires a few extra steps compared to shipping domestically within the lower 48. Unlike Mexico, Canada allows U.S.-based carriers using less-than-truckload, truckload or flatbed equipment to haul directly to Canadian consignees. However, hauling intra-Canada freight is disallowed.

Experts also emphasize that an experienced cross-border freight broker is almost always worth using. That’s because that broker is responsible for clearing goods into another country while navigating Customs protocols. While many businesses that frequently ship to Canada have existing broker relationships in place, carriers such as Averitt, Schneider, Ryder, CFI and other experienced cross-border carriers can streamline the process even further with an expert team of in-house Customs brokers.

Both a bill of lading (BOL) and Canadian Commercial Invoice (CCI) are also required. The CCI tells Customs of your shipment details and outlines the responsible parties. Your Customs broker will review the BOL and CCI before shipping to ensure all relevant information is accounted for.

In addition to other standard considerations, like a packing list and proper payment documentation (such as a letter of credit), you’ll also need a Certificate of Origin when shipping into Canada. This certificate is used to help the United States, Canada, and Mexico Customs officials determine whether goods entering their respective countries qualify for preferential tariff treatment.

The Certificate of Origin has also seen changes under the USMCA. All three countries were required to use a uniform document in the past. Now, under the USMCA, there is no must-have format. As long as the proper data points are addressed, the requirement is fulfilled. Also, under NAFTA, the importer wasn’t allowed to fill out this document. Under the USMCA, the producer, exporter or importer can complete the certificate. 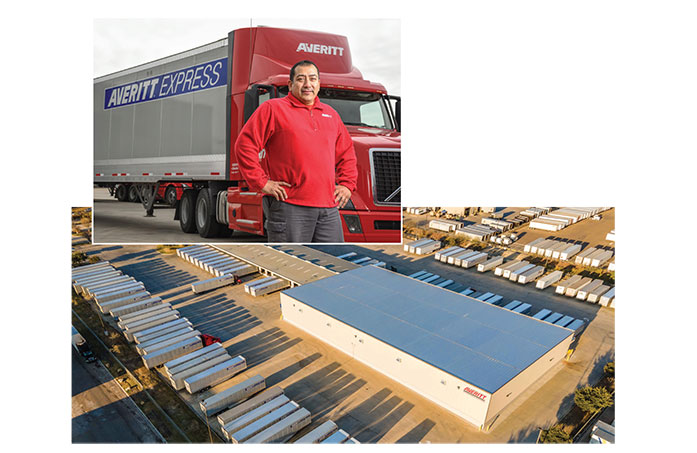 “One of the most important plans that a shipper needs to nail down to move freight across the borders with relative ease is the Customs clearance process,” says Ed Habe, Averitt’s vice president of Mexico sales (above left). Averitt’s service center in Laredo, Texas (above).

Where are we headed?

The trade war with China has companies doing everything that they can to reduce Customs duties. One of those strategies is using USMCA. It maintains the zero-tariff treatment of NAFTA, has the same principles of the legacy program, and to this point, the Biden Administration has not changed anything about the program.

Three things have to happen to successfully achieve duty-free status:

Pride advises to make sure that USMCA certification is legitimate. She said some importers fail to determine if their item is eligible for USMCA—or fail to actually qualify the item under the USMCA Rules of Origin. And, in many cases, BPE sees manufacturers simply signing the USMCA certificate without identifying the preference criterion by which the item was qualified.

“There are way too many instances where false USMCA statements are made,” Pride adds. Making a false USMCA statement about Free Trade Agreements could trigger the False Claims Act, which exposes the importer to potential civil penalties. And that is a whole new level of headaches and liability that no U.S.-based shipper or manufacturer wants, she says.

“It may sound like we don’t like USMCA, but we do,” Pride adds. “We just like it when it doesn’t put the importer at risk for false claims, misstatements or other enforcement action. So please, if you’re going to claim USMCA, make sure you know what you are doing. The cost to defend false USMCA statement far surpasses any savings that you could ever achieve.”