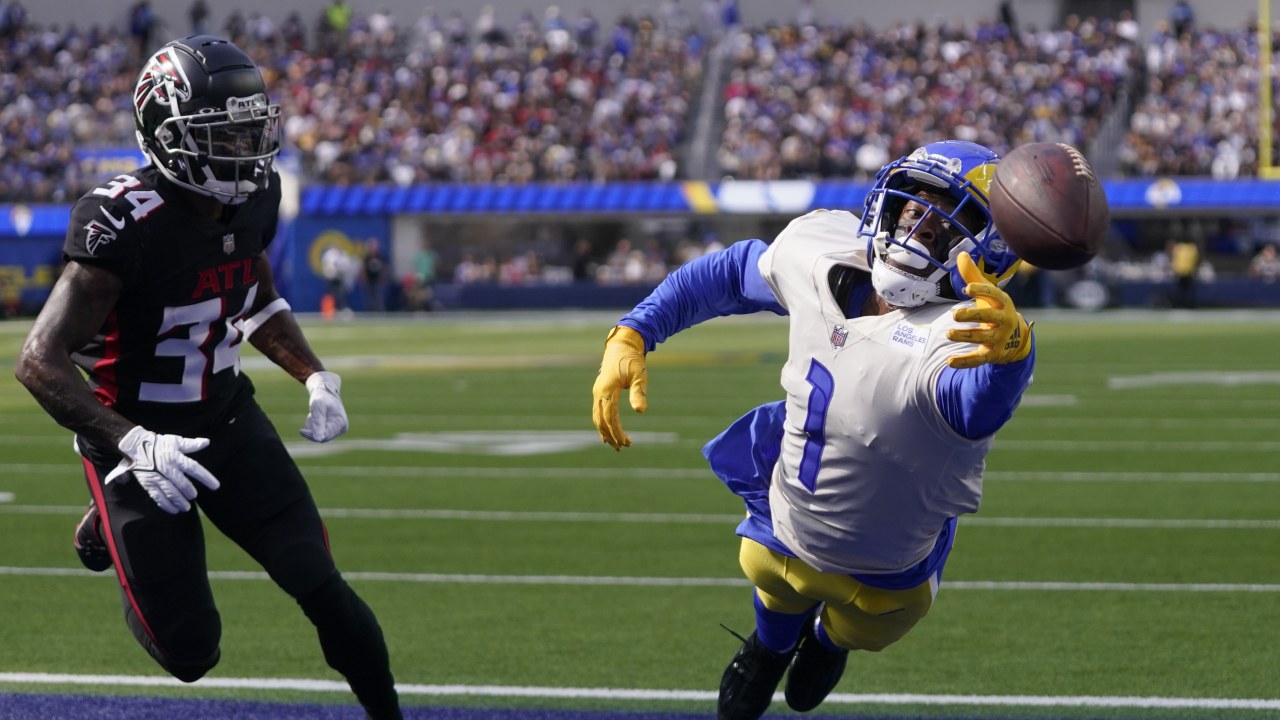 LOS ANGELES (AP) — For the first 48 minutes against Atlanta, the Los Angeles Rams looked like proper defending Super Bowl champions while they rolled toward their first victory of the new season.

The final 12 minutes demonstrated they’ve still got plenty of work to do if they intend to contend for a second straight title.

The Rams came alarmingly close to blowing a 25-point lead in the second half of their 31-27 victory over the Falcons on Sunday. After leading 28-3 late in the third quarter and 31-10 with about nine minutes to play, they needed an interception in the end zone by Jalen Ramsey with 1:07 left just to hang on.

Those late struggles — caused partly by a massive special teams mistake, and partly by a fumble from star receiver Cooper Kupp — didn’t erase the positives of the first three quarters, which included an impressive display from the passing game led by Matthew Stafford.

But they did show that these Rams need more work to become as smooth as they were during the best stretches in their first half-decade under Sean McVay.

“First of all, really proud of this team finding a way to be able to get it done,” McVay said. “Man, are there so many things that we can clean up. But I’ll tell you what, (I) haven’t been doing this that long, but I’ve been doing it long enough to know you never take a win for granted in this league. It’s too difficult to come by.”

Kupp had yet another monster game as a receiver, but the offensive player of the year also contributed to the Rams’ late struggles by fumbling with 3:22 to play. Atlanta then got to the Rams 24 before Ramsey’s game-saving interception.

The Rams’ execution was mostly solid before the final minutes, but McVay will have plenty to use for instruction as his team prepares for its first road trip of the season, to Arizona on Sunday.

The Rams’ offense took significant steps forward on the ground and through the air. Los Angeles got 47 yards rushing from Darrell Henderson and 44 more from Cam Akers, while Kupp had 11 catches for 108 yards and two TDs alongside newcomer Allen Robinson’s four catches for 53 yards and a score. Kupp had at least 90 yards receiving for the 21st time in 23 games playing with Stafford.

A special teams mistake was the main reason Atlanta was in position to come all the way back. The Falcons blocked a punt by newcomer Riley Dixon and returned it for a touchdown with 4:57 to play, and the 2-point conversion cut the Rams’ lead to 31-25. Long snapper Matt Orzech, who is fighting through a leg injury, appeared to miss the block that led to the blocked kick. Other than reliable kicker Matt Gay, Los Angeles’ special teamers have yet to make a positive impact this season.

Defensive back Cobie Durant stepped in when veteran Troy Hill went out with an injury in the second quarter, and the rookie immediately made an impact with his first career interception and a 52-yard return on a ball that was bobbled by Cordarrelle Patterson. In the second half, Durant made his first career sack. The fourth-round draft pick is making a case to play regularly, although McVay said he could miss some playing time with a hamstring injury that occurred before his interception.

“Cobie, he’s been in his playbook,” safety Nick Scott said. “It’s pretty obvious. We’re not worried about him.”