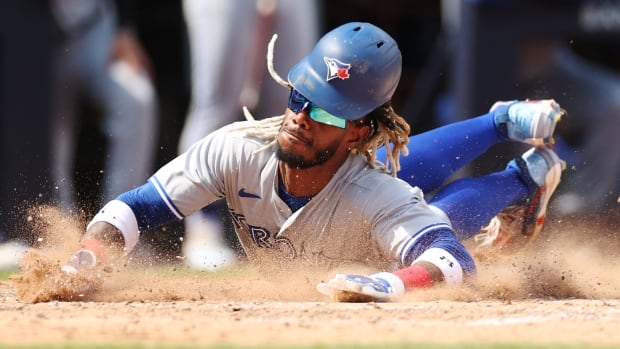 Yankees ace Gerrit Cole twice banged on the dugout roof, shouting in frustration and getting booed as scuffling New York lost for the 15th time in 19 games, beaten by the Toronto Blue Jays 5-2 Saturday.

The AL East-leading Yankees fell to 9-20 since entering the all-star break with a 64-28 record. After holding a 15 1/2-game bulge on July 8, their margin over second-place Toronto is down to seven games.

The Yankees have lost six straight series for the first time since 1995, according to the Elias Sports Bureau. Toronto will try for a four-game sweep on Sunday.

“We can ask all these questions in regards (to our slump) until we’re blue in the face,” Boone said. “We got to go out and do it. I got to quit answering questions about this date and this perplexion. We got to play better, period. And the great thing is right in front of us. It’s right here and we can fix it.”

“It’s there and we can run away with this thing and we got the dudes in there to do it and we got to do it,” he said.

Cole (9-6) hadn’t allowed a hit before the Blue Jays scored four times in the fifth. After he issued a walk and misplayed a grounder, Alejandro Kirk capped the burst with a two-run double that left fielder Andrew Benintendi couldn’t quite catch.

When the inning ended, fans booed Cole and television cameras picked up the right-hander, yelling, and punching the bottom of the dugout roof with both hands.

The reaction from portions of the crowd of 45, 538 were similar to Cole with boos increasing after Toronto went ahead and intensifying after the final out.

Jackie Bradley hit a two-run, go-ahead double down the left-field line, the ball bouncing off the wall and past Benintendi when he tried to field the carom. Bradley delivered after Santiago Espinal got Toronto’s first hit, a double two pitches after missing on a close two-strike pitch.

Raimel Tapia reached on an infield hit by beating shortstop Isiah Kiner-Falefa’s throw and Vladimir Guerrero Jr. reached when Cole slightly slipped in front of the mound fielding the ball. Cole’s misstep allowed Guerrero to beat the throw and the original call was overturned when Toronto challenged.

Kirk then gave the Blue Jays a 4-1 lead when he lined a double to left-centre. Benintendi was playing slightly in, raced back, attempted a diving catch and the ball eluded his glove before centre fielder Estevan Florial fielded it and threw out Guerrero to prevent a third run from scoring.

Matt Chapman added a solo homer in the ninth as the Blue Jays won their fourth straight. Toronto is 13-6 in the Bronx since the start of last season.

Florial hit an RBI single in the second and Gleyber Torres homered in the eighth as the Yankees got nine hits but went 1 for 8 with runners in scoring position. New York has managed just 21 runs in its last 11 games.

Before allowing four runs, Cole allowed two baserunners through the first four and was aided by defensive plays from Aaron Judge in right and rookie third baseman Oswaldo Cabrera.

Judge made a running catch to prevent a double by Bo Bichette in the second with his left shoulder crashing into the fence. Cabrera dove face first into the tarp in foul territory to snag Bradley’s popup and completed the play after his head hit the padding along the side wall.

Toronto starter Mitch White allowed one run and seven hits in four innings. Adam Cimber (9-4) was awarded the win and Yimi Garcia got his first save.

“He was dealing, no-hitter through four and then I think we were grinding him out good enough to get his pitch count up and kind of strung it together there,” Toronto interim manager John Schneider said.

The Blue Jays continue their series against the Yankees on Sunday in New York, with first pitch at 1:35 p.m. ET.