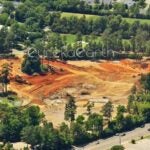 A recent look at what used to be Augusta National’s Par-3 Course.

It’s a tradition unlike any other: tweaking Augusta National during the off season.

This time, though, it’s not the big course that’s getting work.

Bird’s-eye photos, posted on Twitter this week by the aerial imaging company Eureka Earth, shows Augusta’s Par-3 Course (yes, the little track gets capitalized spelling) undergoing what appears to be a major overhaul, its turf torn up, exposing a rumpled swath of reddish-brown earth.

Exactly what’s being done is hard to say.

The club did not respond to an email seeking further information.

But a source familiar with the goings on at Augusta National told GOLF.com that the project is being carried out by the veteran architect Tom Fazio, who has handled multiple nips and tucks for the club throughout the years.

First opened for play in 1958, the nine-hole Par-3 Course was designed by George W. Cobb (a respected designer whose portfolio also includes Quail Hollow, host of this year’s Presidents Cup), with input from Augusta co-founder and chairman Clifford Roberts.

With no hole measuring more than 150 yards, the small course has played an outsize role on the Wednesday of Masters week every year since 1960. That’s when Augusta held the inaugural edition of its Par-3 Contest, an amiable event that has since morphed into one of the game’s cutest competitions, with players’ children often serving as their caddies.

In keeping with its annual schedule, Augusta National closed last month and won’t reopen to its membership until November. But it seems that something’s always happening behind the shuttered gates of Magnolia Lane. And guessing what the club is up to is a year-round golf-world game.

In recent years, Eureka Earth has added substance to the speculation by sharing aerial photos of the world’s most famous club, capturing images of hush-hush projects ranging from the demolition of the old ANGC pro shop to modifications to the 11th and 15th holes.

Not surprisingly, this week’s Twitter post drew a flood of comments from Eureka Earth’s followers, many taking stabs at the purpose of the Par 3 project.

That seemed plausible, given the tight confines of the course and the fact that the Wednesday contest appears to grow more popular every year.

Don’t hold your breath waiting for the club to provide an explanation.

But count on this: The work will be completed before April 2023.

A golf, food and travel writer, Josh Sens has been a GOLF Magazine contributor since 2004 and now contributes across all of GOLF’s platforms. His work has been anthologized in The Best American Sportswriting. He is also the co-author, with Sammy Hagar, of Are We Having Any Fun Yet: the Cooking and Partying Handbook.